For Canadian women in business, the United States represents an ideal place for international expansion. It's a market that's close and familiar, with a burgeoning economy and a strong dollar that exporters can take advantage of. With the help of the Canadian Business Women in International Trade (BWIT) program offered by Foreign Affairs, Trade and Development Canada (DFATD), Canadian women entrepreneurs are making it happen in the U.S., finding and taking advantage of opportunities that are bringing significant returns. 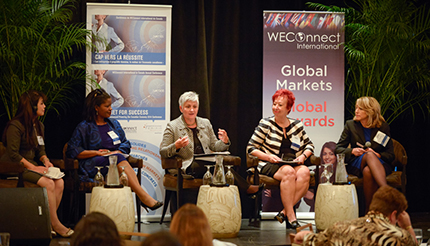 "You can feel the strength of the market there, and that's exciting," says Marla Kott, CEO and co-owner with two other women of Imprint Plus, a thriving Vancouver business that sells software and materials for making reusable name badges, signage and accessories. The company does three-quarters of its sales south of the border, with Canada and some 75 other countries accounting for the rest of its customers. "We expect big growth in the U.S. to come."

Kott credits BWIT with a surge in business that Imprint Plus experienced there in the last five years. It came after she and her partners were introduced to the BWIT team through WBE Canada, a women's networking organization that provides women-owned business certifications. BWIT's support included holding training and networking events at the annual Women's Business Enterprise National Council (WBENC) trade show in the U.S., which helped Imprint Plus gain recognition and develop new relationships and ultimately increased sales.

"They really opened doors for us," she says, adding that BWIT and the Canadian Trade Commissioner Service (TCS) network in regional offices across Canada and missions around the world acted as "a short-cut" for Imprint Plus. "The thing about doing business internationally is you have to go and do business internationally, you can't do it sitting in Vancouver."

Women-owned businesses benefit from knowledge gained and contacts made from BWIT and the TCS, says Josie Mousseau, deputy director of BWIT. The U.S. particularly "holds a lot of promise" for women-owned Canadian companies, she says. "It has ease of access, the language isn't a barrier, people have a general understanding of what Canada is and there aren't many cultural differences between the two countries."

The BWIT program has been successfully assisting export-ready and export-active women-owned businesses (those that are 51 percent owned and/or controlled by women) achieve their potential in such international markets.

The program facilitates access to support networks, government resources, events and services available to Canadian business women. It partners with key stakeholders at Fortune 500 companies to leverage supplier diversity procurement opportunities, where a certain percentage of spending goes to companies owned by women or minorities. It also provides targeted support, market intelligence and contacts via the TCS network in some 175 embassies and consulates world-wide.

"We're creating opportunities, introductions and an awareness of what women-owned businesses have to offer," Mousseau explains, adding that the U.S. is often one of the first markets that women entrepreneurs branch out into, given its proximity and the sorts of programs and women-centred events that can smooth the way for them there. These include annual BWIT trade missions to the U.S., such as the trade mission to Austin, Texas, June5 22-26. That mission is happening in concert with the WBENC Business Fair, which is being held June 23-25. 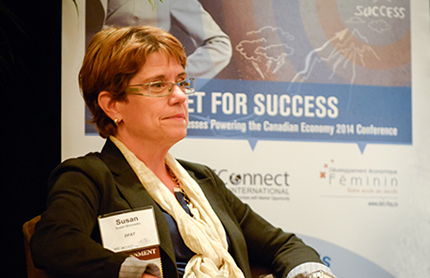 Susan Bincoletto, Assistant Deputy Minister of International Business at DFATD and Canada's Chief Trade Commissioner, says the TCS is "highly influential in global markets." That is nowhere more true than in the U.S., which is the destination for some 73 per cent of Canada's exports of goods and services. "The U.S. market offers some of the greatest opportunities in the world," she comments, particularly in sectors such as aerospace, agriculture, food and beverages, automotive, cleantech, defence and security, education, ICT, infrastructure, life sciences, oceans industries and oil & gas.

The TCS has trade offices all across the U.S. to which women entrepreneurs can connect through BWIT, Bincoletto notes. "It is important to leverage the service and take advantage of its reach," she says. "Borders are being erased and distances are shrinking; we can help facilitate new opportunities in global value chains."

Mousseau cautions that it's important for women to be "on the ground" in the U.S. and notes that there can be a lot of differences in preferences and varying cultures among the different states and regions there. "You can't look at exporting your product to California the same way as to Minnesota or Philadelphia," she advises. "Know your client base; do your homework."

Innovation is critical in U.S. markets, says Kott, noting that American businesses especially respect creativity and an entrepreneurial spirit. "They're willing to give you a chance."

Imprint Plus was started in 1982 by Ellen Flanders in Vancouver and used a metal-working shop to make name badges for employees. Today it is owned by Flanders, Kott and Kristin MacMillan, and it makes systems for companies and individuals to create professional name badges and other products. This year Imprint Plus expects to have more than $12-million in sales, with a strong showing in both the retail and hospitality sectors.

Kott says the U.S. currency shift has increased profitability, but it has also raised the price of the goods and services that Imprint Plus needs to buy in the U.S. "It's not a 20 percent bottom-line impact, but it is a nice cushion."

Ximena Pauvif-Machado, a trade commissioner at the Consulate General of Canada in Miami, says the strong U.S. dollar and the interconnectedness of the Canadian and U.S. value chains especially brings opportunities for Canadian companies in fields such as aerospace and automotive parts. Women are increasingly running businesses in such sectors, as well as in marketing, software, technology, consumer product and food and beverage companies, Pauvif-Machado says. The "mompreneur" phenomenon, where stay-at-home mothers simply run small businesses on the side, is less and less the case these days, she points out.

She says that many companies in the U.S. have supplier diversity initiatives, with major enterprises expanding their supply chains to include more businesses owned by women, as well as other minority groups.

Through the programs, relatively small companies can end up meeting directly with the purchasing teams of multinational corporations that it would normally "take them a very long time to meet, if at all," she says. "It doesn't matter if it's a Fortune 500 company or a small shop; they're all on an even playing field."

Imprint Plus benefits significantly from diversity set-asides in the U.S., Kott says, noting that with the name-badge market there valued at more than $500-million a year, getting just a tiny percentage of that could be huge. "We have a long way to go."

She advises women entrepreneurs to be patient and to prepare when planning to export to the U.S. "Things take time, but that's business. It doesn't happen overnight."

BWIT's assistance to Imprint Plus is "immeasurable" as it continues on its export journey, she adds, recommending that women-owned companies check out what the program—and the U.S. market—can do for them. "There are opportunities that are right there, right now, and I want all those women in business to take advantage of the help that's available. That's how growth happens; it's good for the economy and good for Canada."