Canadian merchandise exports1 grew 11.1% in 2014 — three times as fast as in 2013, reaching an all-time high of $524.3 billion. But while energy continued to be the driving force behind Canada’s export performance, accounting for over a third of Canada’s exports growth in 2014, the year’s growth was not all about energy. Several other industries also posted strong export growth, and most of these were manufacturing industries. Focusing exclusively on non-resource-related products (mechanical and electrical machinery, automotive products, aerospace and miscellaneous manufacturing industries), export growth amounted to 11.2% in 2014 — faster than overall growth, and the largest increase since the global recession of 2008-09. 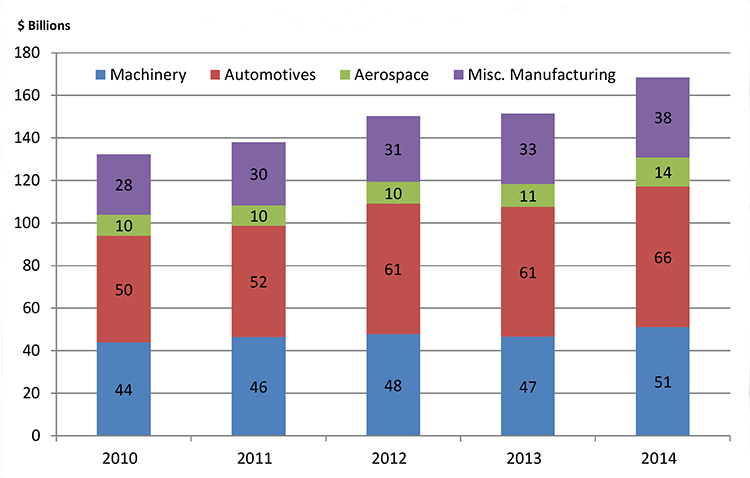 2014’s growth brought non-resource-related exports to $168.4 billion, which was nearly one-third of Canada’s total exports last year. After years of flat performance, machinery exports increased by 9.8% in 2014, while aerospace exports jumped by 27.1%. The automotive sector continued its recovery, with exports growing by 8.2%. Exports of miscellaneous manufactured products, which include a wide array of consumer goods from scientific equipment to toys and furniture, have also gone up 13.4%.

Energy continued to perform strongly in Canadian exports in 2014, but that performance masks strong growth in other areas. The year 2014 was a good one for non-resource-related industries, a testament to the strength and flexibility of Canada’s economy.

1 All data is in Harmonized System (HS) classification and reported on the Customs basis, as opposed to the Balance of Payments Basis.