A gateway to half the world's population

When WoodPlus Coatings Group Ltd. started trying to export its wood finish products five years ago, it decided to make its first foray abroad in Asia, with its burgeoning middle and upper class and focus on high-quality materials.

The company in Pickering, Ont., which makes coatings for use on exterior structures such as log homes as well as and interior wood surfaces like siding and panelling, had a choice of locations for its new Asian headquarters that spanned thousands of kilometres and several time zones. 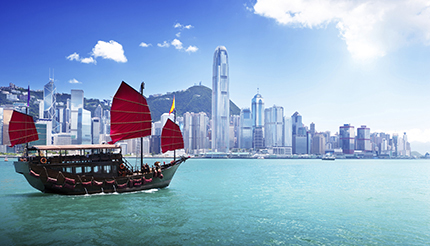 Hong Kong won the exercise handily. Situated within five hours of half the world’s population, the island city has a highly educated, multi-lingual population of more than 7 million people, a strong work ethic, a sizeable services sector and a low-tax regime, not to mention acting as a springboard to the Chinese market and the rest of Asia.

“It’s a nice central place, it’s stable, it has the infrastructure, banking and more,” says Kevin McGeown, founder and owner of the company, which started 10 years ago and today exports 40 percent of its products. “Hong Kong is the gateway to Asia; it makes it quite easy.”

A steady stream of Canadian companies is finding much the same thing in the former British colony. Long a centre of trade and commerce in the region, Hong Kong especially beckons today.

“There are definitely a lot of opportunities here,” says Lynn McDonald, the consul and senior trade commissioner at the Consulate General of Canada in Hong Kong and Macao. “It’s a cosmopolitan, high-functioning, city, a services and logistical hub in the heart of Asia with a taste for new and innovative products.”

Hong Kong is a Special Administrative Region (SAR) of the People’s Republic of China and is governed under the “one country, two systems” model. The city is a mature trade and services-driven centre and maintains its own economic and trade policy. In particular, the rule of law remains important for the advancement of Canadian interests in this free-market economy.

A campaign titled Think Asia Think Hong Kong, organized by the Hong Kong Trade Development Council, encourages companies to use Hong Kong as a base for regional trade and investment. There will be a free TATHK event in Toronto on June 8, sponsored by the Canadian government and other agencies, where Canadian companies can learn more.

Canada and Hong Kong have particularly strong links, McDonald notes. Hong Kong is home to some 300,000 Canadians, and there are close to 200 Canadian firms with offices in the city, among them all of the major banks as well as Manulife, Sunlife, Canadian Pension Funds, Bombardier, retailers such as Lululemon and ALDO, close to 40 ICT companies and many others.

Think Asia Think Hong Kong (TATHK) is a campaign run by the Hong Kong Trade Development Council to help businesses learn about opportunities. Participants can register for the free TATHK event on June 8 in Toronto, which will provide an opportunity to meet with a large number of Hong Kong companies that can help companies set foot in Asia.

Canadian SMEs interested in exploring the idea of exporting to Asia are especially welcome to attend. Service providers and potential partners will be present at the day-long event.

McDonald says that Canadian agri-food products are especially popular in Hong Kong, with its “appetite for really good quality, safe and sustainably produced food.” Ginseng grown in Canada represented more than 50 per cent of imports of all types of ginseng by Hong Kong in 2014, totalling more than $160 million. In addition, exports of Canadian soybeans, wheat, beef and fish and seafood products find ready customers in the Hong Kong market.

Hong Kong is especially attractive to Canadian SMEs as a platform to go global, McDonald says, both as a market in its own right and because it provides a showcase for products and technologies to buyers from Mainland China and the region.

She adds that one important characteristic of Hong Kong is that it often has limited shelf space, “so you need to be able to deliver consistent, high-quality supply.” Competition is based on excellence and innovation, not necessarily price, she says. “Hong Kongers will pay a premium for quality and safety.”

Hon Kong is also a fascinating place to live, with a mixture of Chinese and Western and a fast-paced nature, she notes. “Be prepared to build and sustain relationships.” SMEs particularly see it as a “comfort zone,” she notes, an oasis of familiarity in what can be a complex region.

McGeown says he signed up with an agent in Hong Kong, which is critical to doing business on the Mainland as well as in the rest of Asia. “You need feet on the ground to make the connections.”

He says that the Chinese, with more and more disposable income, are importing and building homes out of BC red cedar, which makes his wood coatings popular. There is also a strong awareness of environmental issues in the region, with strict regulations on Volatile Organic Compounds (VOCs), for example. His products are VOC-compliant.

McGeown says that Hong Kong has a reach throughout Asia that his company is looking for but is a “more Western” place to be situated, with high standards and a strong business culture.

“All the facilities are there,” he says. “It gives you a presence that is easily transferable into the Mainland.”

Professional, logistical and financial services from lawyers to accountants are widely available in Hong Kong to assist companies, and taxes are favourable. The maximum personal income tax rate is 15 percent and the maximum corporate tax is 16.5 percent, and there is no value-added tax.

A tax treaty between Canada and Hong Kong that came into effect in 2013 reduced tax barriers between the two markets, limiting withholding taxes for cross-border payments and eliminating double taxation for those who do business in both economies.

GuestLogix Inc., a Toronto company that provides technology platforms to process transactions made in-flight on airplanes, as well as on other forms of transportation, chose Hong Kong for its regional Asia Pacific headquarters in 2012. Chief Operating Officer Patrick O’Neill says that opening the Hong Kong office was part of a move to get more market share in fast-growing regions like Asia.

“Hong Kong is what I consider an international gateway,” he says. “It gives us access to that part of the world.”

“There’s still more potential for us,” O’Neill remarks, with China expected to outpace North America in terms of volume and Hong Kong is a critical part of the picture. “It's well-established, with top-tier infrastructure, IT, finance, transportation and most important banking systems, because we deal with payment solutions.”

Alexandria Sham, national chair of the Hong Kong-Canada Business Association, which has 1300 members, the majority of them SMEs, says that Canadian companies find it “remarkably easy” to do business in Hong Kong. Most people speak English as well as Cantonese, the language of Hong Kong, and often Mandarin, the language on the Mainland, she says. Hong Kong’s legal system is governed by the rule of law, it offers protection for intellectual property and it has a stable and fully convertible currency.

She says she hears from organization members who regret the fact that they tried to bypass Hong Kong and go directly into China. They found that they didn’t understand the market and the culture there, she notes. “The largest trade deals and the money are still coming out of Hong Kong.”

Partnerships and joint ventures are helpful, she says, and “it’s also important to be there and understand the local market.”

Canadians are seen as trustworthy in Hong Kong, McGeown notes, and the assistance of the TCS is valuable in making contacts and introductions as well as organizing trade missions.

“They understand the culture, they speak the language,” he says, noting that it has been helpful to have his wood finishes featured in demonstration projects such as on a Buddhist temple there. “They see you and the product.”

O’Neill says that for GuestLogix, Hong Kong is about growth and improvement.

“It’s not just a place where you go copy, cut and paste everything you’ve done in other parts of the world. It’s also an opportunity for you to test and learn,” he adds. “It really gives you a chance to pressure-cook ideas and see what works and what doesn’t.”