Dependency or diversity? The concentration of Canadian exports 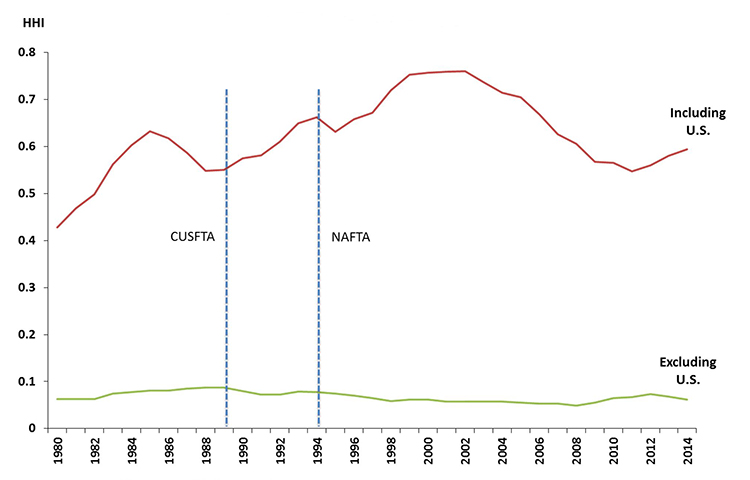 Between 1980 and 2014, the diversity of Canadian exports was determined almost entirely by the U.S. As exports to the United States increased, Canadian exports became more concentrated. Especially notable is the increase in export concentration between 1988 and 2000. During this period, the Canada-U.S. Free Trade Agreement (1989) and NAFTA (1994) came into effect, followed by a large increase in the U.S. share of Canadian exports (from 74% to 87%). The increased diversity since 2000 is also notable as other markets, especially emerging markets, gained importance. More recently, however, strong U.S. economic performance has led to a reversal in the diversification of trade.

However, when the HHI is calculated without including the U.S., it indicates that Canada’s exports are highly diversified. Fluctuations in Canada’s market concentration have occurred but the changes were mostly offsetting as Canadian exports to Asia shifted away from Japan and towards China.

Most countries tend to export to large, proximate economies. In 2013, Sweden, a country with which Canada shares many economic similarities, had a comparable level of market concentration to Canada as a result of the attractive power of the EU.

Canada’s exports are highly concentrated due to its bilateral trade with the U.S. However, beyond the U.S., Canada’s trade is highly diversified geographically. Alternatively, one could think of the U.S. as 50 individual markets.