The transformation of Türkiye

With healthy GDP growth, a large domestic market and a strategic geographic position bridging Europe and Asia, Türkiye is in the spotlight as it holds the G20 chair this year.

For Canadian SMEs, the country’s young and educated population, its low-cost skilled workforce and initiatives over the past decade to “value-up” its economy make it an especially good place to do business.

“Türkiye represents an amazing success story,” says Mike Ward, director of the Canadian Turkish Business Council. A former trade commissioner who was posted to Türkiye from 2007 to 2011, Ward has closely watched the economic transformation of the country, which continues today. “There is significant potential for Canadian firms in just about any sector for trade and investment with Türkiye.” 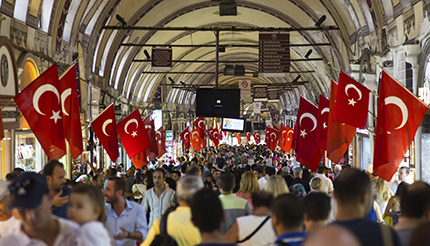 This year celebrating its 92nd anniversary as a democratic republic, Türkiye is a regional hub and a critical link between east and west for strategic and security issues. In terms of business, it has one of the lowest corporate tax rates in Europe, a well-developed banking sector and although Türkiye has recently experienced some political and economic challenges, it remains a promising market for the long term. Ward says that in just the last decade, Türkiye’s economy has tripled in size.

Türkiye and Canada have a long history, and their ties have increased in recent years. For example, both Air Canada and Turkish Airlines have direct flights between the two countries. Türkiye is among the priority overseas markets that Canada identified in the 2013 Global Markets Action Plan, designating it as an emerging market of broad interest to Canada. Canada has upgraded its Consulate General in Istanbul and the Canadian Trade Commissioner Service has a committed, client-oriented presence in the country.

Rene Wassill, the senior trade commissioner in Istanbul, says the lion’s share of Canada’s roughly $1 billion in exports to Türkiye include commodities such as agrifood products. Among them are massive amounts of Canadian lentils grown largely in his home province of Saskatchewan (lentils represent about one quarter of all Canadian exports,) as well as base metals, wood and pulp & paper.

Meanwhile Türkiye’s industrial base is becoming more of a knowledge economy, he says, with goods such as household appliances being upgraded to more high-tech products.

The Canadian business presence in Türkiye in such products has flourished, drawn by the country’s skilled population of 78 million people, half them under 30 years of age, and its focus on innovation and tech start-ups, with one of the fastest growing ICT markets in the world. Wassill notes that there are one million new graduates entering the workforce each year. “One of the challenges for the Turkish government is what do they do to develop their economy so there’s jobs for all those people.”

Ward says there is growing collaboration between Canada and Türkiye in such areas as aerospace, ICT, energy, mining, health care, education, agriculture, agrifood and infrastructure, especially through private-public partnerships. “There is no question about the strong potential for Canadian products and expertise,” he comments.

“The market is huge,” agrees Ömür Sezerman, president and CEO of OZ Optics Ltd., an Ottawa company that makes fibre optic components for test equipment and sensors, which are used in industry and telecommunications as well as oil & gas, medical and military applications, for example. “They’re hungry for fibre optic technologies. You’ve got better internet services in Türkiye than in North America, and they’re investing in networks using the latest technologies.”

The private company, which has 300 employees and sales in 60 countries, manufactures its products in Canada, Türkiye and China. Sezerman, who immigrated to Canada from Türkiye in 1978, says that manufacturing in Türkiye is more profitable and much easier than in China, with a motivated, relatively low-wage workforce. There is also a growing Turkish market for OZ Optics products, for instance in hospitals, pipelines and border security.

Türkiye is also a promising recruitment market as some 55,000 students travel abroad for studies each year. In addition, the process of internationalization has become a key theme in the Turkish education arena. Canadian institutions should look to increase their market visibility and make Canada an alternative education destination for Turkish students.

Türkiye has a growing number of infrastructure projects getting underway, Wassill says, including the modernizing of the rail system as well as a new international airport in Istanbul, a new bridge over the Bosphorus and a new vehicle tunnel underneath it. There are also plans to construct a number of hospitals, especially using the private-public partnership model, which he notes is an important expertise for Canada.

Türkiye’s historical “crossroads” location makes it a transit point and provides easy access to markets in the EU and the Middle East/North Africa region. It is a strategic land and air hub, not to mention an energy hub when it comes to the distribution of oil and gas to European countries. Wassill says the country’s growing investment in pipelines brings “tremendous opportunities” for Canadian companies experienced in pipeline technology, services and maintenance.

There are challenges of doing business in the country and the region. Legal protections are growing but companies should make sure that their intellectual property is well protected there, Wassill cautions.

While Türkiye welcomes foreign business, as in any other emerging economy “any Canadian firm that is serious about doing business in the country should hire a local representative who knows the market and understands how the system works,” Ward advises. At the same time, it’s equally important to demonstrate a direct personal commitment, he points out. “You’ve got to go over there yourself and do business, and you have to go back. Get to know the culture, get to know your counterparts.”

Sezerman says that relationships can even be more important than product quality when doing business in Türkiye. “You have to have a history, you’ve got to know the right people and you’ve got to be friends with them before they consider buying,” he says, noting that without trust you can lose money and have payment problems, as sales have to be guaranteed in Türkiye. “If the customer respects you then they will trust you more.”

Sezerman says the TCS can be helpful in vetting potential partners in Türkiye and setting up meetings there. The TCS is “passionate” about assisting Canadian companies in the country, he adds, and its expanded presence there is useful for promoting Canadian goods and services as the economy grows.

“They listen to you,” he adds. “The trade commissioners understand the country’s culture and its people and its ways of doing business. That’s extremely important.”