The claim is often made that Canada does not have many large firms. This supposed lack of large firms, it is thought, hinders Canada’s international commercial performance as large firms are more export intensive, undertake more outward direct investment and aid smaller firms in exporting, directly or indirectly through global value chains (GVCs) or as suppliers.

Number of Companies Relative to GDP 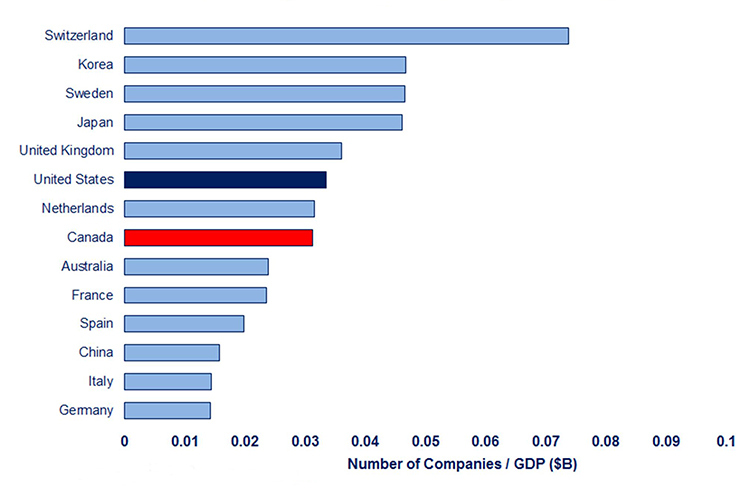 The Forbes 2014 list of the world’s 2000 largest publically traded companies is used to test the claim1. It is no surprise that the U.S. has more large companies on the list than Canada; 563 for the U.S. compared to Canada’s 57. But, to make the comparison more relevant it is necessary to scale such figures by the size of the economy. The U.S. economy is roughly ten times the size of Canada’s, so with about ten times as many companies on the list Canada’s performance is about the same as that of the U.S. with both ranking about average among major OECD countries. Those countries that top the list are well known for the oversized role that large firms play in those economies. Most large diversified countries rank towards the middle. Not only is Canada’s rank close to that of the U.S. but it is also between the UK and France. The economies of Italy and Spain are often thought to be overly dependent on small firms and the data bears that out. Surprisingly, Germany ranks lowest on the list with that economy powered by its middle sized firms, despite being home to a number of well‑known large firms.

Number of firms is not the only measure. When sales of those companies are used as the benchmark Canada’s rank falls, as we do not have producers of consumer products or retailers, like Walmart, that generate a lot of sales. The opposite is the case if assets are the measure of choice. Canada’s asset heavy banks propel us well past the United States’ ranking.

Much has been made of Canada’s lack of large firms. However, when adjusted for the size of the economy, Canada ranks about average in terms of number of large companies. And, while banks account for a good portion of this, it is not a situation that is unique to Canada.