Diversifying Canadian exports within the U.S.

The U.S. is by far Canada’s most important export market, accounting for 76.8% of Canadian merchandise exports in 2014, a share that has seen three years of consecutive increases, up from 73.7% in 2011.

However, U.S. GDP growth has varied greatly from state to state. Since 2000, some states, such as North Dakota, Texas and Oregon averaged over 3% growth per year while others, such as Maine, Ohio, Missouri, and Illinois, to name a few, averaged less than 1% annual growth. Michigan had the unfortunate distinction to be the only state with an annual average decline over this period (-0.1%). 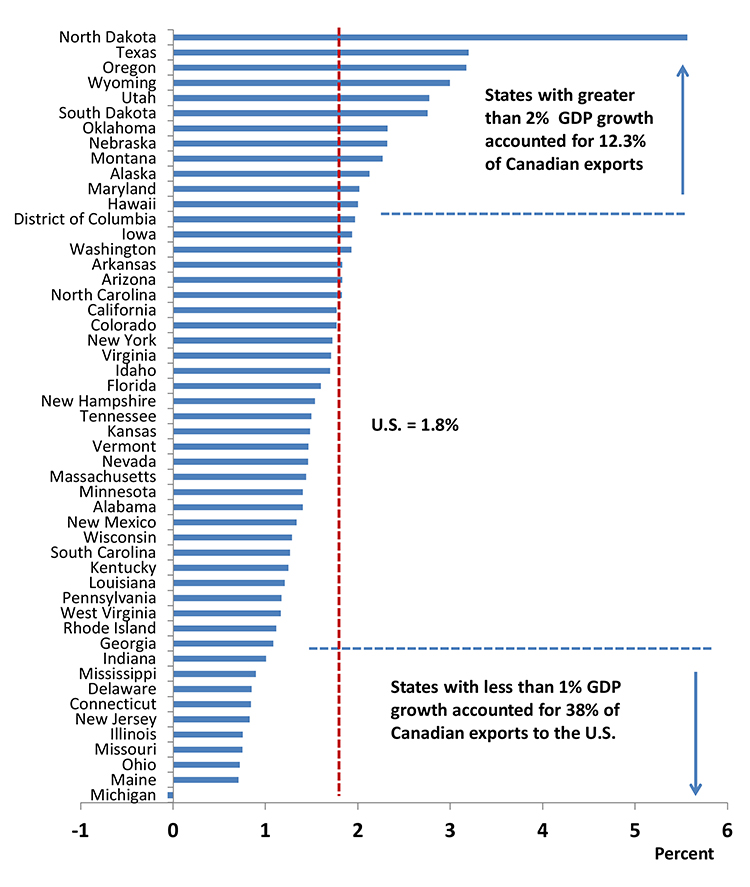 Canada’s export focus on lower growth states is in part a function of geography, with many of these slow growing states bordering or being in close proximity to Canada. It is also, in part, a function of the structure of Canadian exports. For instance, Michigan is Canada’s largest individual state export market, accounting for 13.8% of Canada’s merchandise exports to the U.S. in 2014, a large portion of these exports (60.6%) are automotive and auto parts, one of Canada’s major exporting industries.

Much has been said of the need for Canada to grow its exports by diversifying to markets outside of the U.S., and especially to faster growing emerging markets such as China and India. And while these do offer great opportunity to Canadian exporters, the same might be said for a number of U.S. states. Texas, for example, is an economy of US$1.6 trillion, and has seen annual average real GDP growth of 3.2% between 2000 and 2014. This makes Texas both larger and faster growing than the economy of Mexico. While further away from Canada than many states, it is still closer to Canada than many countries, and offers a growing market for Canadian goods and services.

Visit the Office of the Chief Economist for more information.