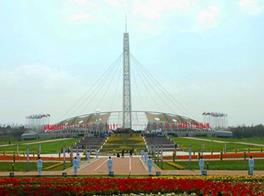 Shenyang is among the top ten largest cities in China and an industrial center and transportation hub for Northeast China. It is also the largest political, economic, and cultural center of Northeast China. One of China’s primary industrial centers, Shenyang is home to some of the country’s leading firms in the aerospace, heavy machinery, defense, automotive, electronics, and software sectors. In fall 2013, Shenyang hosted China’s 12th National Games.

With its favorable geographic location - close to Japan, South Korea, Mongolia and Russia - Shenyang plays a key role as a gateway into the Northeast Asia Economic Region and Bohai Sea Rim Economic Region. Moreover, Shenyang has seven neighboring cities within an hour's drive -- Anshan, Fushun, Benxi, Yingkou, Liaoyang, Tieling, and Fuxin – in each of which the focus is on basic industries and processing, resulting in an urban cluster of 75,000-sq–km that is known as the "Shenyang Economic Zone", with 24 million people.

The State Council has designated the area a "pilot for reforming industrialization" so it expects to have the greatest development potential in China this century and to be an economic power in Northeast Asia and to be competitive internationally. The province is also currently focused on moving towards more hi-tech industries and diversifying its formerly state-owned industrial structure.

Shenyang is the largest collecting and distributing center for commodities in the Northeast. In recent years, with the rapid expansion of integral scale of commercial circulation, a brand-new structure for commercial and trade circulation has taken shape in Shenyang. With swift growth of the trade fair and conference industry, hundreds of exhibitions are held in Shenyang every year on the average. It has already established trade relationships with over 190 countries and regions in the world, its products are on sale all over the world.

Canada has a number of bilateral trade and investment policy instruments in place that are helping to facilitate and support Canadian commercial engagement in the region including:

Under Beijing’s “Diversifying state-owned industrial structure”, Shenyang, as pilot for reforming industrialization, is likely to be the largest beneficiary due to its large industrial base. Export opportunities exist in machinery, specialty steel manufacturing equipment, petrochemical refinery technology, and power generation equipment. Other areas of potential export interest are management of water resources; treatment of wastewater, solid and hazardous waste; and reduction of sulphur dioxide in manufacturing and power generation.

With more than 150 registered Canadian firms in Shenyang, Canada’s current presence in the region has paved the way for a number of Canadian firms in sectors such as aerospace, automotive and software development, among others. Canada is currently a world leader in the aerospace sector for the supply of aircraft and aviation systems; maintenance, repair and overhaul; aviation training equipment and services; manufacturing and design technologies.

Bombardier Aerospace made great progress in Liaoning with its collaboration with Shenyang Aircraft Company (SAC). The collaboration has expanded in a significant way from Q-400 subcontracting to a risk sharing partnership on C-series. Besides, AAFC, by collaborating with local institutions, established Shenyang-AAFC Innovation Center for Frigid-Zone Agriculture in Shenyang, which provides a platform for collaboration among agriculture scientists. The center has successfully introduced Canadian oat varieties to Shenyang's Kang Ping County. In addition, L-3 MAPPS won a contract to supply a nuclear power plant simulator for the Hongyanhe Nuclear Power Plant Project.

Over recent years, the collaboration between Bombardier Aerospace and Shenyang Aircraft Company (SAC) has expanded in a significant way from Q-400 subcontracting to a risk sharing partnership on the C-series, a newly designed commercial aircraft that focuses on operational flexibility, cost effectiveness, passenger comfort and energy efficiency.

The Canadian trade office in Shenyang enhances the coverage provided by the Canadian Embassy in Beijing, which continues to include Qingdao in its territory of responsibility.