Libya is a North African country situated on the southern coast of the Mediterranean Sea and bordered by Egypt, Sudan, Chad, Niger, Algeria, and Tunisia. This location has enabled Libya to become an important historical trade link between Africa and Europe. The country counts 6.293 million people (2016); with approximately 85% of the population living in urban districts and approximately 65% of the population being under the age of 25. Tripoli is the capital city; other major cities including Benghazi, Sirte, Misrata, Tobruk, and Sabha (Figure 1). While Arabic is Libya’s official language, English is considered the second language, with some French and Italian also spoken. Libya has a desert climate, mostly dry, with the exception of the north which enjoys a mild Mediterranean climate. Libya has 93 municipalities and three geographic regions: Cyrenaica, Tripolitania, and Fezzan. Libya follows Eastern Europe Time (two hours ahead of GMT). 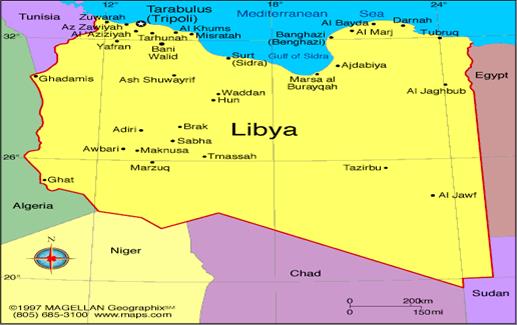 Libya became independent as a Kingdom in 1951. A military coup was staged in 1969 by Muammar Gaddafi, overthrowing King Idris. Gaddafi ruled the country for 42 years, until he was toppled during the Arab Spring in 2011 following an armed rebellion and a United Nations-mandated military intervention. Post-revolution Libya has a wide variety of pressing needs across many sectors in which Canadian companies have expertise. However, the continuing political instability has limited the government’s capacity to move forward on long-term projects. That being said, as the security situation improves, Canadian companies will be well-positioned to contribute to rebuilding efforts, helping return bilateral trade to pre-revolution levels. The majority of Canadian interests are concentrated in the oil and gas sectors. Before 2014, there were approximately 40 Canadian companies active in Libya, mainly in oil and gas, health, telecommunications, aerospace, and education sectors.

On March 14, 2013, the United Nations Security Council decided that the prior approval or notification of the Committee would no longer be required for supplies of non-lethal military equipment and technical assistance intended solely for humanitarian or protective use as well as for security or disarmament assistance to the Libyan government. These changes have been implemented in Canada in the form of amendments to the existing regulations, which potentially will allow for more exports by Canadian companies to Libya.

The Investment Law is designed to encourage the investment of national and foreign capital in Libya. Tax benefits are granted to companies that can contribute to the diversification of the local economy, the development of rural areas, the increase of employment, etc. The tax exemptions applicable to companies registered/governed by the Investment Law include a five-year exemption from income tax; an exemption from tax on distributions and gains arising from a merger, sale or change in the legal form of the enterprise; an exemption for profits generated from the activities of the enterprise, provided the profits are reinvested; an exemption from customs duties on machinery and equipment; and an exemption from stamp duty. A free zone has been established in Misrata (Qasr Hamad port area).

The principal business entities in Libya are joint stock companies, branch and representative offices. A limited liability company (LLC) is available only to Libyan nationals. Decree 207 (2012) states that non-Libyans can only hold up to 49% in a Libyan company. However, the Investment Law provides that under certain circumstances, non-Libyans can own up to 100% in a Libyan company.

In the past, it was very clear that the Privatisation and Investment Board (PIB) is primarily responsible for applications under the Investment Law, whereas the Ministry of Economy (MOE) is primarily responsible for applications not made pursuant to the Investment Law. In post-revolution Libya, this line has been blurred and the MOE is now exercising more control over the PIB. This has a major impact on companies wishing to invest in Libya as this reduces the attractiveness of pursuing inward investment through the Investment Law. This practice is not expected to continue in the medium to long term, but it is a stark reminder of the need to keep abreast of developments in Libya.

If a company is unable to resolve a dispute with the government, it will be able to benefit from the dispute resolution clause in its contract, which will stipulate the dispute resolution forum and applicable law. Most Libyan contracts with foreign investors (including Export and Production Sharing Agreements) provide for the resolution of dispute by arbitration in Paris under the Rules of Arbitration of the International Chamber of Commerce (ICC).

Taxation issues in Libya are particularly important for foreign investors. Rules are not always interpreted consistently and practices are prone to change with little notice. Local tax advice and assistance is therefore essential. The principal taxes in Libya are the following:

Membership to the EBRD

Libya became a member of the European Bank for Reconstruction and Development (EBRD) in 2014, with a view of becoming an EBRD recipient country in order to benefit from the Bank’s investment programmes and promote economic growth and implement reforms. Although the decision to grant Libya a recipient country status will be taken separately, the approval of Libya’s membership is an important step in this regard. Beside the expected role of EBRD to provide project financing for banks, industries, and businesses for both new and existing ventures and investments, it will be vital that the Bank takes part in the legacy management of a significant number of publicly owned companies. In doing so, this step by the Libyan authorities will inject more trust in the democratization process being witnessed, as the mandate of the EBRD stipulates that it must only work in countries that are committed to democratic principles as well as the credibility of its institutions.

The Central Bank of Libya issued Resolution No. 96 (2015) which regulates the use of foreign exchange for opening documentary Letters of Credit (L/C) and collection against these Letters of Credit. The application of this resolution is mandatory for all issuance of Letters of Credit for all shipments exported to Libya as of April 30, 2015. All goods exported to Libya require a Certificate of Inspection (CoI) issued by an international inspection company, to allow these shipments to be financed through a Letter of Credit issued by a commercial bank. The goal of the Pre-Shipment Inspection Program is to confirm that the goods are in line with the Letter of Credit in terms of quality, quantity and value of the consignment. The Central Bank of Libya requires the presentation of a Certificate of Inspection on import, which shall be presented to the Bank for any consignment covered by a Letter of Credit.

Process for Opening a Letter of Credit (L/C)

All processes of goods and services importation from abroad require a documentary L/C to be opened under the current rules.