As a two‑time founder of Canadian technology companies, Dr. Suhayya (Sue) Abu‑Hakima knows the importance of start‑ups selling their goods and services abroad as well as finding support at home in Canada. 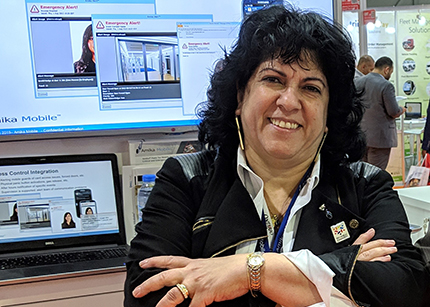 Abu‑Hakima is co‑founder and CEO of Amika Mobile Corporation, a firm in Ottawa that uses artificial intelligence (AI) to allow for critical communication with people on any device on any network in emergency situations. With a Masters and PhD in computer science and computer engineering, specializing in AI, she co‑founded Amika Mobile in 2007 following the Virginia Tech shooting, which highlighted the need for technology that can be used to contact people and lead them to safety.

“It took two hours to get to everybody by email,” she says, by which time the gunman had killed 32 people and wounded 17, the deadliest school massacre in U.S. history. Her company set about developing the Amika Mobility Server, which enables situational awareness, communications and control to be rapidly established by police and security officials in critical circumstances such as fires, tornadoes or mass shootings. “The key to these products is that they can automatically discover mobile devices in public places to lead people to safety, which is unique amongst all of our competitors,” she says.

The system, which went on the market in 2011, can be used for example by stadiums, airports, hospitals, shopping centers and campuses where visitors need to be accounted for and managed. It “auto‑discovers” their devices in public places by intelligently leveraging a vast “cobweb” of invisible networks that include the cellular system, LANs, voice networks, wifi and more.

“The whole architecture underlying it is an AI platform,” she says. “We have the ability to send location‑based emergency alerts and informational announcements to people’s phones in no time.”

Amika Mobile (“amika” means “friendly” in Esperanto,) has 16 international patents underway with 10 granted. It has won 22 security industry awards for its innovations and is “way ahead of the curve,” Abu‑Hakima says. But the key has been Government of Canada innovation programs that helped it get off the ground and an “aggressive but deliberate” strategy that is bringing it to the global market.

“If you want to be successful you have to sell outside of Canada. Any entrepreneur worth their salt will tell you the same thing,” she says, noting that half of the company’s market today is in the U.S., and it is now moving “in a controlled manner” into the United Arab Emirates.

An important element of this SME’s export plans has been identifying it as a WEConnect International certified woman‑owned business, Abu‑Hakima says. It is also getting assistance from the Canadian Trade Commissioner Service (TCS) and its Business Women in International Trade (BWIT) program, as well as the Ontario government’s Export Service Branch, “which are all actively trying to help propel SMEs,” she says.

The United Arab Emirates is modernizing at a fast pace, and at the heart of its modernization agenda is the issue of women, says Daniele Haddad, a trade commissioner in Dubai who is responsible for the information and communications technologies sector as well as life sciences and innovation.

She says the UAE government “has taken strides to ensure that women are consulted on national matters.” For example, almost a third of its cabinet consists of women, and the country announced in 2018 that women will make up half of its Federal National Council, the advisory body that represents the Emirati people.

Haddad suggests that one strategy for women‑led businesses is to find local women champions or supporters from within their industry. “They can also leverage the many women‑in‑business activities that the TCS organizes.”

For example, the TCS in Dubai has supported a number of women leadership roundtables, especially in the tech and innovation sectors, she adds. “This helps Canadian and UAE women learn from each other, network and receive help toward their business goals.”

“We’re very blessed to have a number of really good people around us,” Abu‑Hakima remarks, noting that the TCS team has also “been phenomenal” in the UAE. “We’re very pleased with their efforts.”

Daniele Haddad, a trade commissioner in Dubai who covers the information and communications technologies sector as well as life sciences and innovation, says that “Amika Mobile has demonstrated a sustained commitment to the UAE, which is one of the critical success factors for this market.” This is evidenced by Abu‑Hakima’s repeat visits to the UAE to strengthen existing relationships and forge new ones, she notes. “Active engagement by a company’s management is important to create momentum and interest around their product or solution, especially in the early stages of entry into the market.”

The main challenge for the company locally has been navigating the IT security landscape, which is quite competitive in the UAE, she says. The TCS has supported Amika Mobile by providing intelligence on potential partners, as well as vetting the organizations and locating suitable points of contact for Amika Mobile. “This was followed by introductions facilitated by our local office, which can help open doors,” says Haddad, noting that the country “is very welcoming to women entrepreneurs.”

Abu‑Hakima says the challenges of being a woman in the world of technology are many. “Sexism is sexism, it’s rampant everywhere. You learn to work around it,” she comments. “The first thing they see is you're a woman. Then they see you're highly intelligent and they realize you're very credible, then it becomes a non‑issue to them.”

She calls banks and other financial institutions the “last bastion” of male control, making it “extremely difficult” for women to raise capital. So her company has had to be creative to finance its growth, bootstrapping as well as taking advantage of government funds and R&D tax credits.

Amika Mobile is undertaking its UAE expansion “extremely cautiously,” she says, noting that going abroad “is expensive and it’s also very risky. You have to be very careful, you have to take your time and you cannot rush it.”

The company is looking at other global markets, with the assistance of the TCS, and will probably next focus on the UK, Germany and France, as well as pushing farther into the Persian Gulf area, she says. “Our product speaks all languages, it can go anywhere.”

Abu‑Hakima meanwhile is a sought‑after speaker for her wide experience and frank views, and she enjoys acting as a mentor and a role model. She would like to see more girls and women get into her field and tells women entrepreneurs to “be cautious and deliberate” in going abroad, although “there’s no hesitation to go to the U.S.” Women‑owned businesses should become certified, which “opens doors and raises your profile” among corporations looking to source from under-represented entrepreneurs, she says. They should also “leverage as many government products and services as possible” like the TCS, CanExport and BWIT. “You really want to make sure you have good advice. It’s so important.”

Amika Mobile is continuing its R&D efforts, for example focusing on smart city technologies. “We have a product that hasn’t got an equal in the world,” Abu‑Hakima adds. “The whole goal is to save lives.”