Knowing when to ask for help is a hallmark of any successful entrepreneur. This is especially true in Canada, where advice and funding are readily available through government programs and initiatives like the Canadian Trade Commissioner Service (TCS). 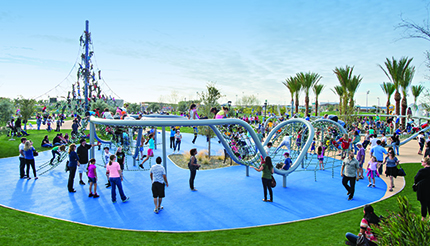 Richard Martin is CEO of Dynamo Playgrounds, a company that designs and builds commercial playgrounds. Government support has helped Martin take Dynamo from start‑up to international success with products in over 40 countries.

“I always had a vision that I’d be an entrepreneur,” says Martin. He got the idea for Dynamo while working for the largest school board in the Ottawa‑Carleton region.

“I saw a lot of money being spent on playgrounds that children found boring. They’d often vandalize or misuse them as a result,” says Martin. “I thought, how can we make playgrounds more challenging, so kids engage with them properly?”

Martin also wanted to approach accessibility in a more imaginative way. “Growing up, I had a brother with severe disabilities. There wasn’t a lot we could do together in parks,” he explains. “I believe that everybody who comes to a playground should be able to feel part of society.”

Martin founded Dynamo Playgrounds in Ottawa in 1993 and began engineering a new breed of playground. It was a challenging task, so the company reached out to its first government partner—the Industrial Research Assistance Program, or IRAP—for support. 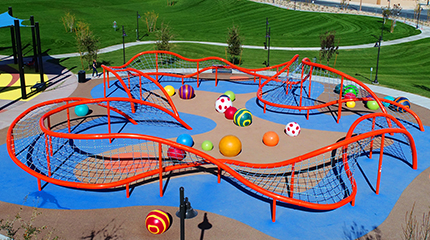 “IRAP is still a very strategic partner of ours. If we’re having a problem with a design, we can work with IRAP to find a solution,” says Martin. “We’re actually working on a very exciting protype with them at the moment.”

“Our playgrounds are designed to be very safe, but with a higher perceived risk. That’s why kids find them so interesting,” explains Martin.

But the qualities that make children excited about Dynamo’s products also made buyers cautious. “Playgrounds were overly safeguarded at the time. It felt as though we’d come along with a Harley Davidson instead of a car.”

Martin wasn’t about to give up. He tackled the issue head on, becoming a voting member of the American and Canadian councils for safety standards. “We helped rewrite a lot of the standards that were blocking us from being innovative,” he reports.

“Some markets are challenging to enter, but the opportunities they present are worth the investment,” says Martin.

As the business expanded into the U.S. and beyond, Martin realized they needed to offer credit to certain customers. He reached out for government support again—this time to EDC (Export Development Canada), a Crown corporation that offers insurance and financial solutions.

“We insured all our receivables with EDC so that we could extend credit,” says Martin. “This gave us access to international clients who wouldn’t buy from us otherwise.”

Dynamo had suppliers in global markets too—but in 2015, the business hit an issue with its Korean manufacturer. In true entrepreneurial spirit, Martin saw this as an opportunity to bring production in‑house.

Dynamo secured a business loan from the BDC (Business Development Bank of Canada), allowing it to buy equipment and move to a bigger site in Plantagenet, Ontario. “I can say without a doubt, we wouldn’t be where we are today without the BDC,” notes Martin.

“The BDC took us from not even having a welding machine to owning two large manufacturing buildings,” says Martin.

Today, Dynamo exports products across the globe and has distributors in North America, Australasia, Chile, Dubai and Egypt. The business is currently exploring the Saudi Arabia market with financial assistance from CanExport—a government program delivered by the Canadian Trade Commissioner Service to support businesses looking to expand their international markets.

“If you don’t explore these opportunities, you don’t know what you’re missing,” he notes. “You’re the entrepreneur—it’s up to you to go and find them.”