Accelerating a breakthrough for Alzheimer’s patients

Close to 50 million people worldwide suffer from dementia, and two‑thirds of those have Alzheimer’s. Treating and caring for these patients costs a trillion US dollars every year. 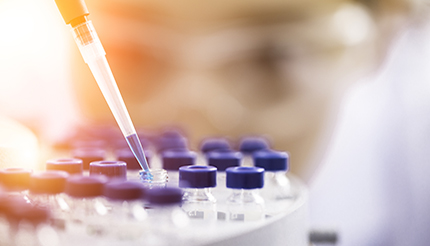 Yet there’s relatively little research on the disease. There’s just one publication on neurodegenerative disorders for every twelve on cancer, and there hasn’t been a significant breakthrough on Alzheimer’s in 40 years. What’s more, drugs that currently exist to treat Alzheimer’s only manage symptoms and prolong life.

But Dr. Nathan Yoganathan, President of Montreal-based KalGene Pharmaceuticals, hopes to change that. His business is about to start human clinical trials on a disease‑modifying therapeutic—in other words, a treatment that aims to reverse damage caused by Alzheimer’s.

Trials such as these need large groups of patients, making it costly to get the drug to market. So, when KalGene needed funding during its research and development phase, Yoganathan knew it would be challenging to attract investors.

Fortunately, Christine Sarkisian—a trade commissioner at the Consulate General of Canada in Boston—contacted Yoganathan with some useful advice. She recommended that he apply to the Canadian Technology Accelerator (CTA) based in Kendall Square in Cambridge, Massachusetts.

The CTA program is funded by the Government of Canada and delivered by the Trade Commissioner Service (TCS). Based in four cities across the U.S.—with plans to expand to other countries—the program exposes small Canadian businesses to new perspectives and global connections.

The Boston CTA is based in the heart of the region’s life sciences hub. “You can’t replicate this kind of cluster anywhere,” says Sarkisian. “The entrepreneurs who come here get a global perspective on how to partner, find funding and commercialize their product.”

“It’s important to understand what’s happening in the global market from an early stage,” says Yoganathan.

KalGene’s application to the Boston CTA was a success, and the business spent three months in the city in the fall of 2015. Yoganathan was given a co‑working space (at no cost) in the Cambridge Innovation Centre, as well as a team of mentors to guide him. This team included a venture capitalist, a legal advisor, a commercialization expert and a pharmaceutical executive.

“I met with my mentors every two weeks to work on things like my business plan, value proposition and pitch,” says Yoganathan. Sarkisian adds: “Each mentor provided important feedback, because they all brought a different perspective to the table.”

Yoganathan also benefited from access to a pitch coach and industry networking events. Sarkisian introduced him to executives and investors – one of which was Lumira Capital.

Sarkisian has spent almost 30 years with the Trade Commissioner Service, specializing in business development in the life sciences sector. Mid‑career, she went back to university to do a course in molecular and cellular biology at Harvard—just so she could better understand and serve her clients. Sarkisian is a co‑founder of the Canadian Technology Accelerator in Boston, which won an international award for Best Accelerator Program of the Year in 2016.

Two years later—having clearly put his pitch training to good use—Yoganathan announced an investment from Lumira that would fund KalGene’s pre‑clinical studies. This adds to a total of over $70 million reported by the CTA Boston’s 100 participants since 2013.

It’s been three years since KalGene left the CTA, but Yoganathan still relies on the TCS to bring him opportunities. Sarkisian gives the example of a neurology‑focused partnering initiative she ran in 2017.

“Kalgene was one of 10 Canadian companies I selected to attend,” she explains. “We made over 60 introductions to local pharma and biotech firms over two months. Then we organized a networking event for 40 key contacts, where each Canadian entrepreneur delivered a one‑minute pitch.”

Today, KalGene has completed pre‑clinical trials and is looking for partnerships to help commercialize its Alzheimer’s drug. “I’m thrilled with the company’s progress,” says Sarkisian. “By helping businesses like this, we’re supporting innovation in Canada and healthcare everywhere.”