When it looked to expand internationally two years ago, Spoonity Inc. focused on places where it knew people as well as the local culture, language and business practices. Today the Ottawa company, which develops digital loyalty programs for coffee shops, restaurants and other retailers, is vastly redefining such familiar territory, with the help of the Canadian Trade Commissioner Service (TCS). 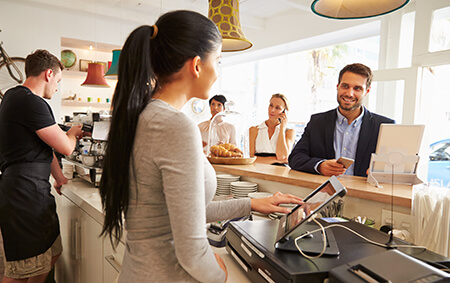 “When you enter into a new market, getting connected is important,” says Max Bailey, 32, the company’s founder and CEO. “We find it helpful to work with the TCS to find opportunities to showcase our technology.”

That technology has grown over Spoonity’s eight years, as has its reach, which now includes merchants in 15 countries and counting.

Bailey grew up in a “very entrepreneurial” family, living on a hobby farm west of Ottawa. Starting at the age of eight he sold strawberries, pumpkins and corn at the local farmer’s market. The lesson? “People want what you have and you have to bring it to them,” he says.

He became an exporter at 16, running a business where he bought consumer electronics on eBay in North America and resold them on eBay in lucrative markets such as the United Kingdom and Australia. While studying engineering at Queen’s University, he started a software firm that developed custom programs for local businesses and researchers in the academic community.

Bailey started Spoonity in 2011 in order to introduce mobile and cloud technology into the restaurant space. “Loyalty programs are a great opportunity to do that,” he says, especially as businesses grow and owners look to continue to interact with customers. Spoonity provides a web platform for businesses that are looking to connect with and reward their customers through apps and gift card products, but that don’t have millions of dollars to create such systems. 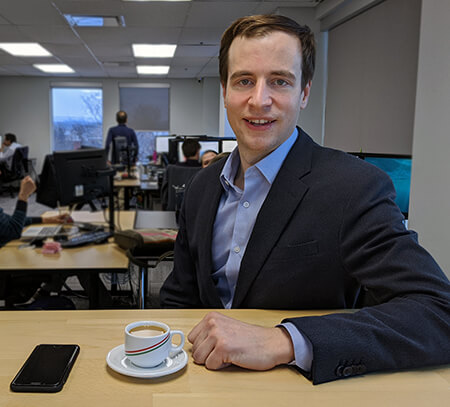 The company’s first client was a local chain of Ottawa coffee shops. It quickly grew to national enterprises and “then we decided to look outside of Canada,” Bailey recalls. “It’s important for Canadian businesses to branch out; the longer it takes to realize that, the slower their growth. Canada is a decent market, but you’re never going to scale or achieve a critical mass here.”

With the company’s director of technology and product development haling from Ecuador, the decision was made to make that country its first foreign target. Other markets in the region such as Colombia and Argentina have followed.

Today, the private company has 20 staff and manages an impressive 75,000 transactions a day. Thousands of merchants with 12 million customers use its systems. About 60% of revenues continue to come from Canada, “but that number is rapidly changing,” Bailey says.

Going global hasn’t been easy. “There’s all kinds of challenges that come into play and we’ve certainly experienced a lot of them. Our expansion experience was no different,” he says. Local partners are important in its export markets, he says, as are trade commissioners who introduce the company to such partners, local merchants to work with and important trade shows to attend.

It’s especially critical to get the first system up and running in each new market, which for Spoonity has usually been a coffee chain. “It’s a space we know well,” Bailey says, noting that such “visibility in the market helps us educate the market.” Indeed, once the Spoonity system was operating in the major Sweet & Coffee chain in Ecuador, the head of that chain was a key speaker at a breakfast seminar in 2017 organized in collaboration with the TCS.

“That program was very successful; we’ve done well in that market since then,” Bailey says, noting that Spoonity clients in Ecuador include Burger King and Dunkin Donuts, as well as a major drug store chain. “Our app was rated the most valuable in the country. It even beat Uber and McDonald’s.”

Patricia Bustamante, a trade commissioner in Quito who covers the information and communications technology sector as well as infrastructure, cleantech and security, says that Spoonity’s technology has “captured a niche market that promises to continue to grow.” Ecuador’s telecommunication sector has experienced remarkable expansion, she says, with major investments in areas such as education, ecommerce and smart cities. And its young population and embrace of the mobile internet “has created myriad business opportunities for innovative applications.”

Bustamante says that the TCS offered Spoonity general information on the local market, explained agreements in force between Canada and Ecuador and provided suggestions on local accounting and consulting firms, as well potential clients. The fact someone in the company is Ecuadorean and Spoonity found a good local partner there helped it “to fluently navigate this market,” she says. “In order to be successful, you need to build direct relationships, which means visiting the country is essential,” Bustamante advises. “I would also strongly recommend that Canadian companies interested in doing business in Ecuador contact the TCS, as we are always ready to support them to succeed.”

Bailey says that trade commissioners bring expertise, promote awareness of Canadian innovation and offer legitimacy to small and medium enterprises (SMEs) just starting out in a market. “Canada seems to carry a positive brand globally. People have a lot of confidence in doing business with Canadians.”

Spoonity also got funding through CanExport, a TCS program that shares marketing and travel costs with SMEs to help them open up new markets. Spoonity hopes to continue its expansion into Latin America, including setting up an office there, Bailey says, as well as exploring the Middle East and developing markets such as Australia.

Today, the company is working with ever‑larger clients and moving into vertical markets such as hotel chains.Its unique technology is also becoming increasingly advanced using artificial intelligence to “create unique interactions and experiences” and customize incentives for individuals based on their purchases and preferences.