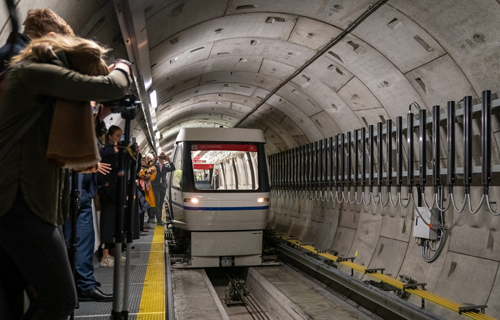 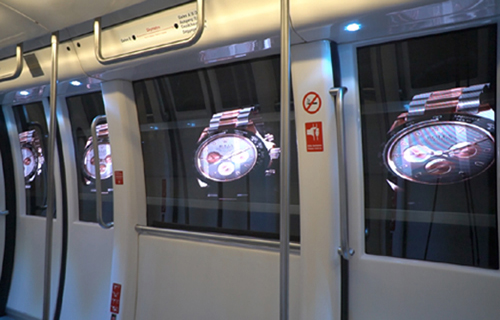 The company sees unlimited potential for its proprietary digital in‑tunnel advertising systems, and with the assistance of Canada’s Trade Commissioner Service (TCS) it’s finding success in a growing number of major metro systems around the world.

“This is a big global industry, and we have a way in the side door,” says Ken Bicknell, president and CEO of Adtrackmedia Inc. The company was envisioned in 2009 by Drew Craig, a third‑generation media executive with roots in Canada’s television and radio industry, who today is its executive chairman. He saw the potential in the high‑growth digital‑out‑of‑home (DOOH) advertising industry, focusing on the transit space and using the innovative technology to “monetize” subway walls.

The private company’s end‑to‑end software and hardware systems deliver high‑resolution, dynamic LED advertisements to reach the large, sought‑after urban commuting audience. Adtrackmedia deploys and operates the technology, which provides a media experience to passengers looking out the windows of the train that is “unparalleled in metro advertising today,” Bicknell says.

Adtrackmedia enters into long-term concessions with metro and airport‑rail owners and operators, which benefit from new non‑fare revenues by leasing out their tunnel walls to the company, as well as getting an incremental share of revenues from the ads displayed on them. Studies show the technology also enhances subway riders’ experiences, through its distraction and entertainment value.

The company’s success has “not been without its speedbumps,” Bicknell allows, but it saw a global opportunity with its unique technology and compelling business model “and we’ve been on a tear for the last five years.” Its first system was installed in São Paulo, Brazil, and since then the company has secured agreements with metros in cities including Seoul, Barcelona, Madrid, Zurich, Rome and Rotterdam. “We’re gaining momentum.”

The TCS has been “staggeringly” helpful, given the relationship that trade commissioners establish with local transit authorities, Bicknell says. “You can’t measure the benefit of that.”

For example, Melanie ter Meulen, a trade commissioner in The Hague who covers investment and digital industries, got in touch with the operator of the Rotterdam subway system and within six months Adtrackmedia had answered a request for proposal there. 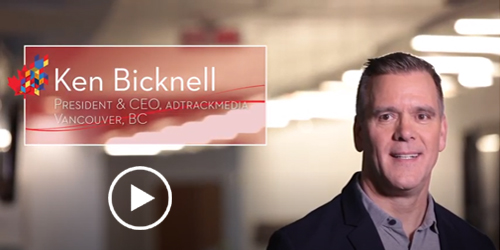 Why Adtrackmedia says they couldn’t have done it without the TCS
The success of Adtrackmedia is a prime example of what the TCS can do for you. The Trade Commissioner in Madrid found an opportunity, remembered a conversation with Adtrackmedia, and connected the two. Adtrackmedia made the sale, and it had a huge impact on their export success in the EU.

“That was fully through her initiating the contacts, understanding the technology and making things happen,” Bicknell says. “Our global traction has been enabled by the efforts of the TCS on our behalf.”

In Spain, Máximo Hurtado and Yves Belliveau, Madrid‑based trade commissioners, say that Adtrackmedia has made effective use of the TCS in the country, where its technology has been installed in the Madrid and Barcelona metros.

“As its customers are public authorities, the involvement of the TCS can carry a lot of weight,” says Hurtado, who covers telecoms, agri‑food, ocean technologies and creative industries. He and Belliveau let officials at the Madrid Metro know that the Government of Canada supported the company’s participation in the tender, “which provided considerable credibility.”

Belliveau, who covers transportation, aerospace & defence and fintech, says it helped that the company hired a local representative for sales and business development, which could result in additional business in Spain. It also partnered with key Spanish companies, such as Telefónica, one of the largest telephone operators and mobile network providers in the world.

“Developing personal relationships can have a huge impact, especially where English and French are not the predominant languages, and administrative processes can be complicated and difficult to navigate,” Belliveau says.

Joanne Smith, a trade commissioner in Rome who is responsible for the aerospace, defence, security, transportation and automotive sectors, says Adtrackmedia’s “international strategy is a winner,” and its business model means that transit operators don’t have to make huge investments.

She says a local company such as Tunnel Motion—Adtrackmedia’s partner in supplying its system to ATAC, Rome’s metropolitan underground operator—is essential. This can help the company monitor developments in metro projects and nurture contacts, especially those that handle procurement.

“Public tenders are challenging to trace and follow. They require a local partner to decipher the language and technicalities,” Smith advises. “Having ears and eyes on the ground also reassures the contractor and ensures you are following the tender regarding in‑service support.”

Bicknell says the company is currently working with the TCS in about 20 markets where it sees good prospects, and it has particularly set its sights on North America in 2021. Adtrackmedia currently has 11 employees, with 14 of its systems operational in seven of the 10 cities it has contracts in globally, he reports, and there are 200‑plus metros and airport train systems where it could have business.

The disruptive early‑stage company is a “world leader in this space,” but it requires capital to grow, he points out. Adtrackmedia hopes to secure financial support from the Canadian government to assist its international efforts. “We’re at a crossroads,” he says.

Bicknell calls the COVID‑19 pandemic “a short‑term hiccup” that’s hampering the company’s revenue efforts but is making transit authorities even more keen to increase their own non-fare revenues and enhance their passengers’ trips. He comments that anything that improves public transit sustainability and ridership reduces the carbon footprint in urban centres.

“We see ourselves as a flag‑waver of those elements for Canada,” he comments. “The TCS is pitching that story around the world on our behalf.” Adtrackmedia also benefits from Canada’s solid reputation in the rail transportation sector, with the success of companies like Bombardier abroad, Bicknell adds. “We’re a Canadian company with sheer gumption—and TCS support.”