Undertaking industrial research & development with a partner in a foreign country can bring valuable expertise and vast markets, but it’s not without its challenges. When EPIC Semiconductors Inc. of Vancouver decided to team up with a company in India to make a “smart” balloon catheter for use in cardiovascular procedures, it had the support of Canada’s Trade Commissioner Service (TCS) and its Canadian International Innovation Program (CIIP). 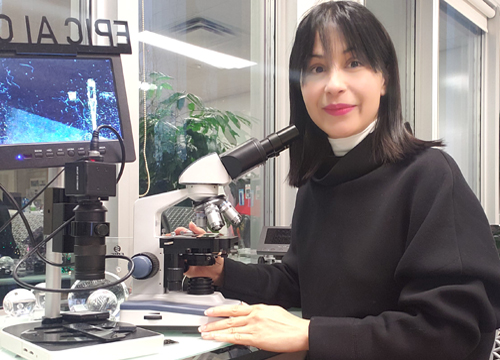 EPIC makes microchips the size of a speck of dust that include an artificial intelligence processor and the ability to communicate wirelessly, while requiring very little energy. These remarkable qualities mean these microscopic AI sensor chips can be embedded in products from running shoes to advanced manufacturing technologies and devices implanted in the human body.

When the company was selected to participate in a CIIP trade mission to India in 2018, it went looking for potential uses and partners there—and it wasn’t disappointed.

“We have a unique product, and now we are opening new horizons,” says Linda Zadeh, founder and CEO of the company, which is currently in the middle of a joint research project with Sahajanand Laser Technology Ltd. (SLTL), a medical device company in Gujarat, India.

Zadeh, who immigrated to Canada from Iran 20 years ago and is passionate about math, engineering and “being at the forefront of technology,” got the idea for her so‑called “smart dust” in 2008. She had just graduated from Simon Fraser University with a master’s degree in biomedical engineering and was participating in the Wired Magazine NextFest event in Los Angeles. Her research on a high‑frequency contactless heart monitor was among the projects featured, but it was the low‑frequency technologies presented there that caught her attention. She got the idea to incorporate low‑power silicon microchips—which can be produced at an affordable price and can sense everything from human actions to physical forces and chemical reactions—into everyday objects. “It realizes the dream of making everything smart,” she explains.

Zadeh started EPIC, which stands for “electric‑field powered integrated circuits”, in 2008. Today the private small and medium‑sized enterprise (SME) has been granted 19 patents for its core technology and it has invested more than $15 million. Epic has 15 staff and projects in the United States, Italy, Germany, the United Kingdom and Sweden, in addition to India.

The fact that the chips are powered and operated by external electric fields mean they can be used in health‑care tools that don’t emit tissue‑damaging microwaves. With negligible radiation given off, they don’t interfere with each other or outside devices, Zadeh says, so many of them can be grouped close together, such as the hundreds or even thousands that might be next to each other in Internet of Things applications.

Connecting with the right contacts

In 2018, EPIC attended the CIIP partnership development activity (PDA) in Mumbai and Bangalore to look for Indian companies that could use its AI chips and found SLTL. The trade commissioners there worked hard to organize matchmaking sessions that “brought the best of the best,” Zadeh recalls, indeed she met with some 100 potential partners. Returning to Canada from the PDA, she followed up with companies that made the most sense. “We needed a partner that had what we didn’t have,” Zadeh explains. For instance, while her company could handle the design and manufacturing of the chips, the other one needed to incorporate them into a device and handle its certification and approval. This process is costly, time‑consuming and requires the kind of sophisticated testing platform that SLTL has.

It was a match. SLTL would integrate EPIC’s chip into the balloon catheters and stents it makes to probe and open up blood vessels. The sophisticated sensor gives such devices unprecedented accuracy, with the ability to determine and transmit their exact position during procedures, Zadeh says. It can be used to detect and prevent blood clots or check for cell‑borne diseases in advanced applications.

Trade commissioners on the ground visited the company on EPIC’s behalf and offered plenty of advice. “The TCS team in India is very active; this collaboration wouldn’t be possible without their support,” Zadeh says. “These are experts in those markets, and they work hard to make Canadian companies successful.”

SLTL also got financial support from the Global Innovation & Technology Alliance, an organization in India that promotes international R&D partnerships, much as the CIIP provided funding to EPIC.

The two‑year project is currently about half‑way finished. The chips have been made and Zadeh expects the products will be built and go through approvals over the next several months, then move toward market. She anticipates major sales of the “smart” balloon catheters and stents beginning in India, where some 10 million people a year with cardiovascular disease go through procedures where such devices could be used.

Many Canadian SMEs are nervous about dealing with India, Zadeh allows, but the Indian market is “very hungry” and has deep expertise in technology. She advises companies like hers to be open-minded, protect their intellectual property, take advantage of support programs and seek the guidance of the TCS.

Alexis Roy, who manages the CIIP for the TCS, says that by participating in the program, EPIC is “building relationships in that particular market” that will help it in the future.

“They’re moving forward,” he says, noting that EPIC is having broad success by using the TCS in strategic ways.

Zadeh is grateful for the help of trade commissioners: “They bring us good technology partners.” She’s taking advantage of more TCS initiatives, for instance EPIC recently participated in a PDA mission in India on advanced manufacturing, held virtually. The company is also involved in a virtual accelerator initiative organized by the TCS in Chicago on industrial Internet of Things technologies. EPIC has also received funding from the TCS CanExport program for its market expansion.

The COVID‑19 pandemic has made it difficult to do things that require travel, but the company uses the time to focus on manufacturing, “so once the restrictions are lifted, we’re ready,” Zadeh adds. “We are finding opportunities like never before.”

The Trade Commissioner Service helps Canadian businesses grow by connecting them with its funding and support programs, international opportunities, and its network of trade commissioners in more than 160 cities worldwide.

Grow your innovative business in international markets with: