Dominis Engineering Ltd. has long been recognized for the unique way that it designs and makes propellors for large ships, and it has contracts with naval and coast guard authorities in Canada and the United States to show for it. 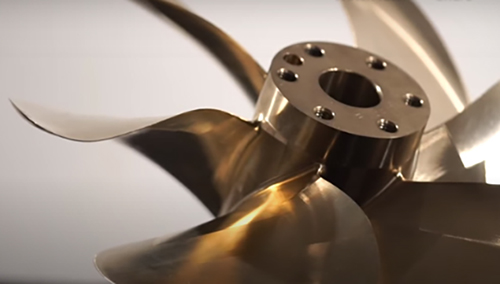 The Ottawa company uses a high‑precision milling process to create and finish its propellers so they produce less cavitation, the noise and vibration that is heard and felt in the water as well as onboard vessels as they move along.

Now Dominis is validating its technology in a research project conducted at the Brodarski Institut, a hydrodynamic research facility in Zagreb, Croatia, with support from Transport Canada and assistance from Canada’s Trade Commissioner Service (TCS). The results could lead to changes in the manufacturing standard for propellers, reducing the noise pollution that disorients underwater mammals such as whales, dolphins and porpoises.

“We take the human element out of the equation,” says company president Bodo Gospodnetic. He co‑founded Dominis in 1985 with his father Drasko, who had retired from the National Research Council as a pioneer in the computer numerical control (CNC) machining of ship models.

The two developed new CNC milling technology for the production of propellers, which are typically finish‑machined by hand‑grinding, given their highly curved design, Gospodnetic says. He calls this a “flawed process”, which creates tiny discontinuities and irregularities in the propeller surface that could cause cavitation as speed increases, compromising its performance. 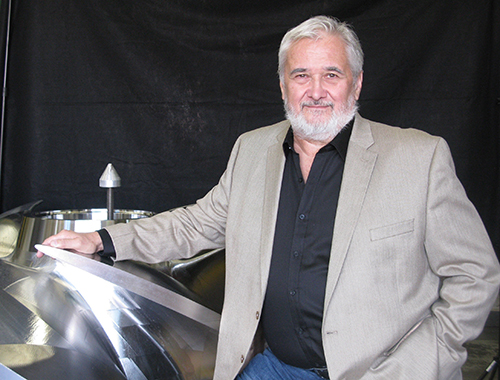 Bodo Gospodnetic, president of Dominis Engineering, is pictured with the water jet impeller for the Littoral Combat Ship that his company makes for Rolls‑Royce Naval Marine.

The computer machining process that Dominis developed produces a smoother final product that “closely replicates the propeller‑designer’s wishes,” he explains. The company’s propellers and water‑jet impellers are currently used on vessels such as Canadian patrol frigates and the U.S. Navy’s littoral combat ships.

Now the technology is being tested at the Brodarski Institut, which has a large enough cavitation tunnel (not found in Canada) to accommodate a large section, called a foil, of a typical propeller, to study its performance. This research is a collaboration between Dominis, Memorial University, Mitacs and Defence Research and Development Canada, and supported by Transport Canada.

With travel restrictions as a result of the COVID‑19 pandemic, Dominis was represented at the launch of the research in October by Alan Bowman, Canada’s Ambassador to Croatia and Kosovo, and Synthia Dodig, a trade commissioner who covers the two countries.

Dodig, whose responsibilities include cleantech, first met Gospodnetic in 2017 on a visit he made to Croatia, a large marine centre with a significant ship‑building industry. She organized a presentation he gave to the Croatian Navy, noting that it’s helpful for such innovative Canadian firms with niches to collaborate in research abroad.

“Science and technology cooperation is key to making Canadian companies competitive globally,” she says. This is often supported by special funds in local markets like Croatia as well as the EU, she points out, which trade commissioners can help to find.

“It’s also good to have the Government of Canada behind you. People take you seriously,” says Dodig, noting that Gospodnetic’s research has important environmental benefits for marine life.

“Bodo is so passionate about this technology,” she adds. “He really believes in what he’s doing.”

Gospodnetic says the TCS has brought Dominis credibility in the world. He calls the company, which has 18 staff, a “microscopic‑sized business” compared with the multinational giants it competes with and sells its propellers to.

“I can look much bigger if I can use some of the resources of the TCS,” he says, and the TCS has opened the door to meetings with big international firms in countries such as Germany and France. “Without a trade commissioner there, they would not give me the time of day.”

Gospodnetic also hopes to get funding from the TCS CanExport Innovation program, which helps to offset costs of such international science and technology collaboration.

Rick Sudeyko, a trade commissioner in the TCS Ontario Regional Office who covers the aerospace, defence and ocean technologies sectors, says the company’s CNC milling process is unique in the world. Gospodnetic’s international strategy to prove his technology and target the regulatory standard for propellers is complex, he comments, but it could give Dominis an edge in the field.

“If the regulatory market changes, all of a sudden he’s going to have huge sales,” Sudeyko says.

The results of the research in Zagreb so far show that even a minor defect from hand‑finishing in the foil produces cavitation much earlier than on the CNC‑manufactured one, he reports. Gospodnetic notes that current propeller manufacturing standard tolerances are “unnecessarily lenient”. Improving these standards—not just in military vessels but also in commercial shipping—could bring massive environmental benefits, by mitigating the harmful effects of propeller noise on marine life.

Gospodnetic advises small Canadian companies like his to carry out research, which provides an advantage over the competition and brings improvements in technology. “If we weren’t continuously investing in research we wouldn’t last very long,” he adds. “My goal has always been to excel in what we do, but also to develop and use technology that will make a positive contribution to the world and the environment around us.”