When she embarked on an ambitious plan to overhaul the way large enterprises and their external consultants work together, Sophia G. Contreras Stone knew it wouldn’t be easy. 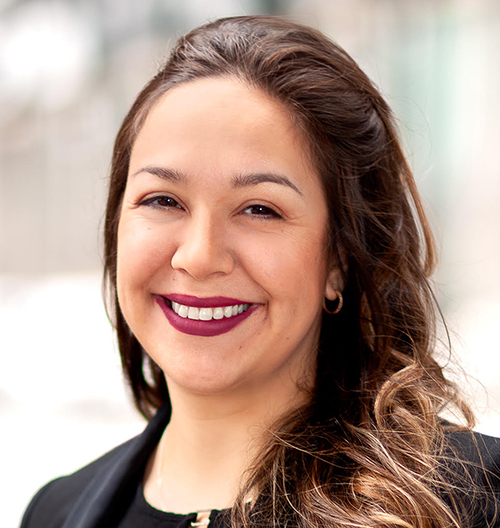 Disrupting the professional services and procurement sector is a tall order, and she especially faces hurdles identifying as an LGBTQ, Latina, mixed‑race white and South American Indigenous entrepreneur. With assistance from Canada's Trade Commissioner Service (TCS), Stone is getting ready to launch a new technology platform that promises to improve the relationship between consultants, consulting firms and the banks and other entities they supply services for.

“I'm trying to create more equity, transparency and trust within the marketplace,” says Stone, who is originally from Regina and has studied and worked in France, Japan and the United States.

She first realized the need for a new way of doing business when she worked in a boutique consulting firm nearly a decade ago focused on risk and regulatory services in large financial institutions. She saw the often exploitative way that consultants are dealt with when hired through vendor‑management systems and master service agreements.

“The markup is astronomical, and the people actually doing the work are getting paid the least,” she comments.

Five years ago she started a business called Indie Group, which does consulting for major financial institutions largely on risk and regulatory projects. Stone, the Toronto company’s principal and head of client engagement, says its revenues helped her “bootstrap” a startup called Indie Tech Ltd. and develop enterprise software that acts as a new type of supplier management system.

“It helps large financial institutions manage and understand the delivery and performance of their suppliers at a granular level,” explains Stone, the company’s CEO. A Masters of Management in Innovation and Entrepreneurship from the Smith School of Business at Queen's University helped her build its foundations and software, which automates the contracting process and uses artificial intelligence to better predict supplier risk.

“No financial institution actually tracks how or whether or not a contract was executed. There's no data on it,” she points out. “We're going to be creating that data.”

Lindsay Varkey, a trade commissioner at the TCS regional office in Ontario, says tech startups can have challenges getting support because they may not yet be earning revenue. But funding programs like CanExport Innovation can provide a “stepping‑stone.”

TCS regional offices across Canada are “a great point of contact,” she says, because they can provide connections to trade commissioners around the world. “We can be your one‑stop contact,” Varkey says. “Even if you don't qualify at the moment, we can always provide you with referrals to resources and other opportunities that you can qualify for.”

Underrepresented businesspeople such as women, LGBTQ and Indigenous entrepreneurs may want to get in touch with the TCS and check out what additional resources may be available, Varkey says.

“We recognize the obstacles that these CEOs and leaders who are part of these underrepresented groups have,” she comments. “We offer programs and are looking for ways to include them and provide them with a little bit more attention and care.”

The TCS offers customized support “to balance out and level the playing field” for such businesses, Varkey adds. “There's still a long way to go, absolutely. But there's a foundation that's being built on right now.”

Today Indie Tech has six staff, and it has filed a patent for its technology with support from the TCS CanExport Innovation program.

Lindsay Varkey, a trade commissioner at the TCS regional office in Ontario who helped Stone with the CanExport application, says the entrepreneur is “very dynamic and very motivated. She does her research and is constantly looking for opportunities and reaching out to trade commissioners. She’s very much headed in the right direction.”

Stone initially encountered the TCS in 2018 when she attended the first LGBTQ trade mission to the NGLCC Business and Leadership Conference in Philadelphia. “The TCS was phenomenal,” she says. “As an LGBT business, it was nice to be around so many people that love and accept you and are giving you support. That absolutely is priceless.”

Indie Tech earlier this year received TCS funding to cover half its entrance fee to participate in the Women in Cloud (WiC) Microsoft Cloud Accelerator, an immersive six‑month program that assists women‑led tech companies to co‑build, co‑market and co‑sell with Microsoft and its distribution channels.

Rob Fiddick, a trade commissioner who covers the Information and Communication Technology sector in Seattle, says the TCS has a partnership with Washington State‑based WiC. Supported by Microsoft, Hewlett Packard Enterprises and others, it creates access to opportunities, programs that accelerate business growth and strategic alliances that advance the success of women in technology.

Fiddick says Indie Tech is among 11 Canadian companies that have been accepted into the WiC accelerator. As a result of the TCS partnership with WiC, they receive a 50% discount, he says. “And several have secured export sales or established technology partnerships with enterprise clients, including IBM and Microsoft, to further grow their businesses.”

Stone hopes being involved in the WiC accelerator will “route us through the Microsoft partner network” and facilitate the entrance into the Microsoft for Startups program.

Indie Tech was also recently one of five women‑led companies selected to participate in the WMN‑FINTech program offered by BMO Harris Bank and 1871, a well‑known Chicago‑based business incubator. The partnership with BMO Harris and 1871 “is a good chance to connect with a bank,” Stone says. “They've been amazing.”

She says that involvement with reputable accelerators brings validation, builds traction and secures partnerships. That’s where the TCS comes in as well, she says. “If I'm a company that the TCS endorses, it increases my odds.”

The TCS in Miami suggested that Stone check out Enterprise Florida, which is connecting her to potential investors there. She plans to relocate in the U.S. because “as much as I love Canada, we’re second‑adopters, where in the United States they're a little bit more willing to test something out.” The move will also help Indie Tech raise a seed round of financing it needs to quickly scale up. Stone says getting access to funds is a significant challenge, noting that Latina women in the U.S. raised just 0.37% of all venture capital last year. “Those are my odds,” she says.

Her advice to companies like hers is to “understand the ecosystem you're playing in and make connections ahead of when you need them, so you can call on them when you're ready.” Stone says she’s often “felt marginalized because I'm in a space that I'm not supposed to be in,” but it’s important not to give up.

“Especially if you have intersectional identities, it's hard, but you can do it. You just have to keep slugging it out and make sure that you find real allies,” Stone adds. “Make sure you stay true to your core and the values that you are trying to maintain within the company, because it's really easy to flex on those just to catch a break.”