David Ciccarelli’s business is built on voices—125,000 of them to be exact—coming from all over the world and speaking more than 100 languages.

His company, Voices.com of London, Ontario, is an online job-search marketplace that connects this virtual community of professional voice‑over actors with businesses that make different digital media products. They include corporate videos and digital podcasts, for example, as well as commercials that are broadcast on television and radio. 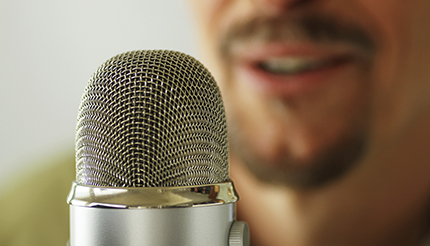 Now the Canadian Trade Commissioner Service (TCS) is helping the business raise its voice internationally. Through the TCS and its Canadian Technology Accelerator (CTA), Voices.com hopes to reach a wider market in the lucrative voice-over field, which is part of the $26-billion language services industry.

“Voice plays a supporting role in every form of digital media content,” explains Ciccarelli, the company’s CEO, who co-founded the business, along with his wife Stephanie, the company’s chief marketing officer. “There’s the voice on the airplane and in the elevator; my GPS is talking to me and the iPhone never stops.”

Ciccarelli, an audio engineer, first met Stephanie, a singer, when he had just opened a small recording studio in London in 2003. The two recognized the growing market for voice-overs and in 2005 started the company at their kitchen table, he says, calling it Interactive Voices and setting up a “primitive” website as a directory of voice talent.

Renamed Voices.com, their enterprise has grown into a successful private company that today employs 85 people, with projected billings of $15 million in 2015. Its “voice-match” web platform is home to some 250,000 customers, he says, half of them voice actors and the other half business clients that hire the actors and pay Voices.com a transaction fee. “It’s like Airbnb for voices,” Ciccarelli explains. Buyers and sellers are matched using a special algorithm and projects can be completed in just 24 to 48 hours, he says, speeding up production schedules and saving on agents’ fees.

Now a major player on Canada's digital media landscape, almost all of the company’s revenues are from exports and some 80 percent of its market is in the U.S., Ciccarelli says. A plan to expand Voices.com globally, broaden its client base and possibly take on investors brought the company to the CTA, starting with Silicon Valley in California and more recently in New York City.

The CTA, managed by the TCS and supported by the Business Development Bank of Canada and other groups, provides Canadian companies with support and access to global markets and entrepreneurial services, says Dina Santos, a trade commissioner in Palo Alto. The TCS team there manages two ICT accelerators, one at the Plug and Play Tech Center in Sunnyvale that focuses on hardware, telecommunication, wireless/mobile solutions, and connected cars, and the other at RocketSpace in San Francisco, which has a focus on software, digital and social media and gaming.

“The CTA is a platform for companies to begin engaging within a unique, world-class ecosystem that is not replicated elsewhere in the world,” says Santos.

Voices.com was selected in 2012 to be part of 48 Hours in the Valley, a highly selective program hosted semi-annually by the consulate in collaboration with the C100 organization. It invites some of Canada's most promising new companies to Silicon Valley for two days of mentorship, workshops, investor meetings, strategic partner visits and networking.

The company was then selected to join the five-month CTA@SFtech program at RocketSpace in 2013, Santos says, with a goal to partner with other digital media companies, follow through with venture capital companies it had previously met through the 48 Hours program, and explore the potential of opening an office in San Francisco.

The two events “initiated access to the valuable ecosystem that makes up the Silicon Valley,” says Santos. “These are programs that leave participants with real business opportunities. They report invaluable new contacts and concrete leads for financing, partnerships, customers, and mentors.”

The CTA@SFtech program provided Voices.com with a “launching pad necessary for connecting with key stakeholders, for drawing new customers and engaging customers in the San Francisco area,” Ciccarelli recalls. There were encounters with heavy-hitters like Adobe, Umano and Microsoft, which are part of the RocketSpace corporate development arm.

“A number of invaluable relationships were created for Voices.com,” he says. “If you’re a new company that’s just landed, everyone wants to learn about you and how they can help you, which really validates the premise of the CTA.”

Ciccarelli says the program is helpful just for “the fact that you’re in the same city, building, or just a desk away” from possible partners. “You’re constantly striking up conversations. People were very generous and would refer you to the next firm, even if you weren’t a fit for them.”

In New York, the company’s number one market for potential customers and partners, CTA Digital Tech gave the company a free “co-working space” in a collaborative environment in Times Square. “It was a place to call home,” says Ciccarelli. It is also a recognizable address that was easy for contacts to get to, “so you’re not having meetings in coffee shops, bars, and restaurants.”

The five-month program has a strong emphasis on business development, sales and marketing. For example, a communications consultant mentored participants on things like maintaining eye contact and using body language. “Everyone’s presentations skills improved dramatically in that session,” he says, which was helpful given that it was quickly followed by a visit to the Time Warner Media Lab, where participants gave their pitches.

Ciccarelli says the CTA in NYC helped Voices.com target the media and entertainment industry. One big issue as it looks for more clients internationally is a language barrier; so far its web platform has been translated into Spanish, and there are plans to add more languages.

The company has grown “organically” by taking on a modest amount of debt, but the Ciccarellis have not aggressively sought out venture capital financing because of a classic “founder’s dilemma” that many SMEs face. Adding investors can mean losing control, he says. “You can choose to be rich or you can choose to be king.”

As a virtual company, the endorsement of the TCS and its participation in the CTA have been invaluable to Voices.com, he says. “The Trade Commissioner Service is opening doors for us. It speaks to the credibility of our organization.”

Ciccarelli notes that a lot of entrepreneurs can become distracted by the many opportunities and possibilities open to them as they grow. Voices.com is still small and the market is relatively unknown, which means it has to educate people and “stay focused on being the best site in the world on which you can find voice talent,” he says.

Santos points out that it’s important for such companies to be exposed to the world’s technology hubs in order to validate their technology against global standards, engage mentors, secure customers and strategic partners and raise capital. “We are seeing increased venture capital flows into Canada, and the CTA is a part of our program to ensure that Canadian small firms are not disadvantaged.”

She says that while companies like Voices.com will not necessarily show short-term results from participation in the CTA, businesses accelerate their development through the resources they gain in places like Silicon Valley. “They return to Canada with a deeper understanding of how Silicon Valley works, and convey this understanding to their team and to others.”

As with most successful CTA companies, Voices.com came into the program with targeted and realistic goals “and put in the work necessary to achieve their successes independently,” she says. The company had a deep understanding of the value of the California market and recognized the importance of a sustained presence in the Valley when it came to funding, partnerships and acquiring customers.

Access is critical, yet connecting with some of the world’s largest tech firms can be difficult, if not near‑impossible. A great product does not always guarantee results, either, Santos adds. “A good team, persistence and a company’s ability to recognize weakness and react to failure are all key traits that are often touted as vital from those who have found success in this environment.”

Find out more about the Canadian Technology Accelerator.