Free trade zones (FTZs) are a type of special economic zones (SEZs) where goods are imported, handled, manufactured, and exported without any intervention from customs. In August 2016, seven new FTZs were announced, bringing the total number of FTZs in China to 11. Each FTZ in China caters to a specific industry and benefits from several types of incentives such as:

In 2013, the pilot Shanghai FTZ was inaugurated. It was a testing ground for legal innovations and had fewer restrictions to attract foreign direct investment. Incentives offered included:

All these incentives were eventually adopted for all the FTZs in China.

In 2015, three more FTZs were announced in Fujian, Guangdong and Tianjin. Fujian FTZ supports trade with Taiwan, while the Guangdong FTZ focuses on economic integration with Hong Kong and Macau. Tianjin FTZ supports northeastern China and the development of offshore financial markets.

In 2016, seven new FTZs were announced to support the economic development of western China and the Belt and Road Initiative. The locations include:

A 12th FTZ will be established in Hainan by 2020. The government aims to develop a free trade port by 2025 in the province and ensure that the island province’s free trade system is completely developed by 2035.

FTZs offer several types of incentives for foreign investors whose firms fulfil certain conditions such as:

In addition to customs duties and tax incentives, the customs clearance process is more streamlined with respect to declarations and payments. For example, companies can declare several batches of goods on a single form and issue a collective declaration for export and import of goods. This reduces clearance costs and increases flexibility. Firms with adequate guarantees can also pay their tax in a one-time lump sum payment within a specific period, for goods already imported.

The FTZs also have relaxed policies for foreign-invested enterprises in specific industries or capabilities, for example, for logistics and pharmaceuticals that are not widely available in China. 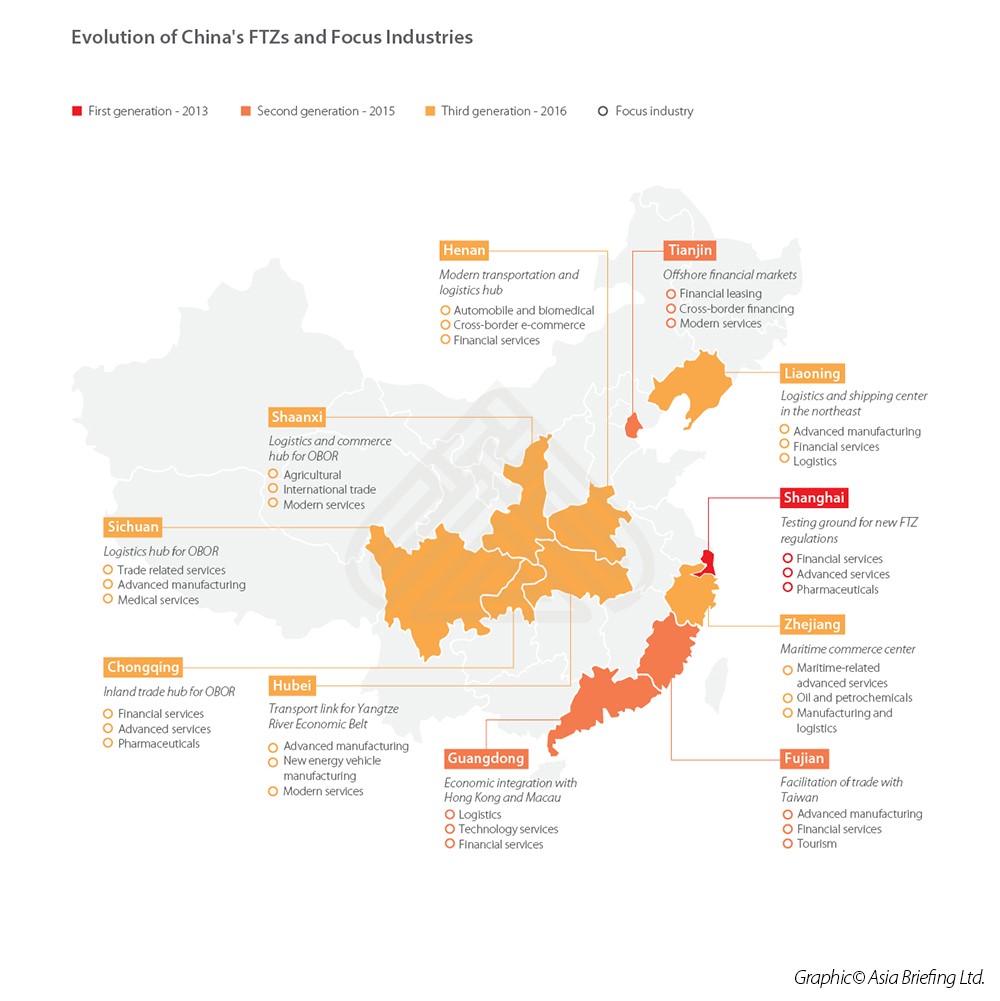 In June 2018, the National Development and Reform Commission and the Ministry of Commerce jointly released the new national and FTZ negative lists, which list prohibited and restricted industries for foreign investment. In addition to these lists, 22 special management measures were introduced to highlight the changes made within the revised lists.

The 2018 national negative list relaxes or removes restrictions on foreign investment in the agriculture, mining and infrastructure sectors. Restrictions in sectors such as finance, insurance and automobile will be gradually reduced.